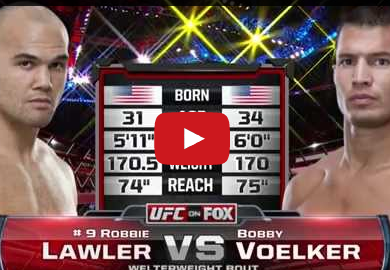 In this fight replay brought to you by the UFC, we see Robbie Lawler square off against Bobby Voelker back at UFC on Fox 8. Voelker was a late replacement for Tarec Saffiedine, and stepped up to the task of fighting an MMA veteran in Robbie Lawler. Check it out:

Robbie Lawler will square off against Matt Brown this Saturday at UFC on FOX 12 to determine who will fight Johny Hendricks for the UFC welterweight belt.