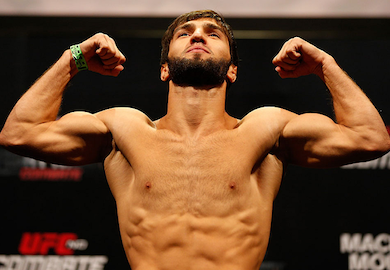 Silva de Andrade and Zubair Tuhugov had the honors of kicking off this evening’s action in the octagon.

After an even first round, Tuhugov started to take control of the action. He secured a takedown at the end of the first round that likely won it for him.

From there, Andrade seemed to be cautious in the second and gassed in the third. After two rounds of hard fought action, his mouth was hanging open and his hands were hanging low. He also suffered a cut in the first round that caused a pause in action so the doctor could take a look at it. That could have hindered his performance in rounds two and three, as well.

Zubair Tuhugov picked up his first win inside the octagon after his performance tonight.