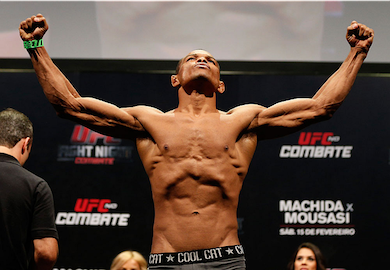 Jesse Ronson did a decent job at controlling where the action went throughout the first round, but Trinaldo was the one who was dishing out the offense and landing significant strikes. Ronson absorbed some damage in the first, but he was able to make it back to his stool when the horn sounded.

The action slowed down in the second round, but Ronson showed improved head movement from the first round and turned up the volume of strikes. Trinaldo ate a back-elbow strike that was beautiful, but it wasn’t a fight-threatening shot. Trinaldo landed a trip-takedown with ten seconds left in the round but it’s unlikely that it aided him in the eyes of the judges.

In yet another close round, Ronson opened it strong while Trinaldo closed it impressively. It was surprising to see that neither man put it all out, trying to finish the fight because they are both coming off of losses.

Francisco Trinaldo was awarded the split decision win and he improved his UFC record to 4-2.