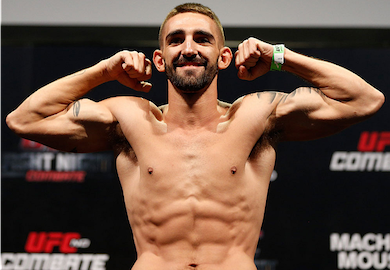 Seventh decision in a row.

This may have been the most competitive fight on the preliminary card, but that’s not saying much. Joe Proctor went for a guillotine choke twice in the first round and Marcello was able to escape twice. Marcello tried to answer with a submission of his own and almost forced Proctor to submit to an ankle lock, but Proctor turned away from the submission and made it back to his feet.

Proctor’s constant cranking of the guillotine in the first round did not seem to effect his fatigue much at the start of the second round. His hands were high and he dictated where the action went in the octagon.

Proctor would box and push the action until Marcello’s back was against the cage where Marcello would attempt a takedown and press Proctor against the fence. Proctor would escape danger and they’d make their way to the center of the octagon where the process would repeat itself.

Joe Proctor was able to pop Cristiano Marcello repetitively throughout the third round and was landing combinations at will. Marcello showed great resiliency by not only staying in the fight, but pressing forward at times.