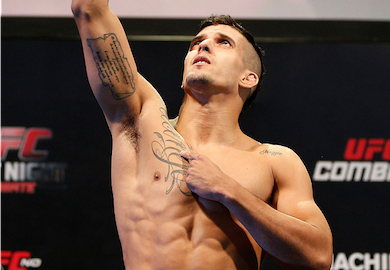 Felipe Arantes and Maximo Blanco put on a heart-felt display in the third bout of the night. Both Arantes and Blanco showed no restraint in throwing dangerous strikes.

Arantes allowed Maximo to control the octagon, but he was aggressive in his counters. He ate strikes to dish them out, and it paid off at the end of the first round. Maximo had Arantes pinned against the octagon and was firing off shots, but Arantes was blocking all of them. Arantes let out a counter shot which allowed him to follow up with strikes of his own. He dropped Blanco with a left-right combination and dove on top of him, but he was unable to finish the fight.

The knockdown gave Arante confidence in his wild striking, which allowed Blanco to duck under shots and take his opponent down. He took Arante down multiple times but did very little with them. Blanco did more damage to Arantes’ gas tank with those takedowns than anything.

The third round opened with a direct-shot to the nuts from Maximo Blanco. The shot was so severe that Arantes utilized the full five minutes to recover and Blanco was penalized by having a point taken away. Arantes used the point deduction against Blanco and tried to bring the fight to decision by plodding takedown attempts.