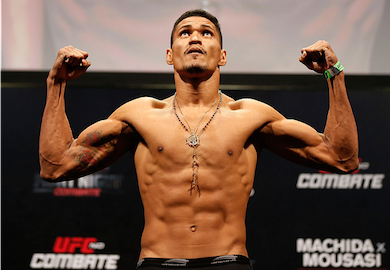 The first round between Alcantara and Tumenov was extremely close. It looked like Tumenov was running away with the fight after he was pounding his fists into the face of Alcantara, but Alcantara displayed amazing jiu-jitsu defense and got back to his feet where he started to take control of the fight. He secured a second takedown and landed some ground and pound of his own. Tumenov’s performance was a bit more dominant and he had more top time, so he may have been awarded the first round.

After Alcantara figured out he could take his opponent down with ease, that was the story of the rest of the fight. Alcantara utilized his grappling skills and short-strikes on the ground to establish time-on-attack while in top control so the referee would not stand them up.

Tumenov landed some decent strikes throughout the second and third rounds, but Alcantara truly outperformed him and deserved the decision win.

Ildemar Alcantara picked up his third win inside the octagon tonight.