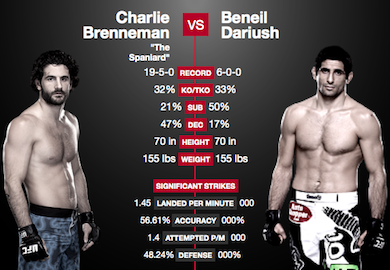 Charlie Brennamen walked into the octagon as the favorite, and it looked like he had the fight under control at the start of the first round. Brennamen had the upperhand whenever they clinched and he controlled the cage, making it difficult for Beneil Dariush to get a good combination in.

Beneil Dariush caught Charlie Brennamen with a swift left cross and Brennamen fell to the ground. Dariush played it careful and got in good positioning before going for the finish so that if Brennamen wasn’t as hurt as he appeared to be, Dariush would still have the advantage.

The composure of Dariush payed off as he was able to soften his opponent up with punches to the head as he transitioned to back control. Dariush locked in the rear naked choke and that was all she wrote; Brennamen submitted in the very first round.

Beneil Dariush defeated Charlie Brennamen by way of Submission (RNC) 1:45 of Round 1