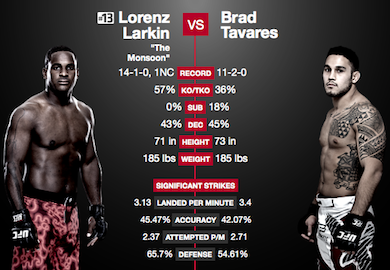 Brad Tavares was able to neutralize Lorenz Larkin’s power throughout the fight by constantly pushing forward and pressing him against the fence. He also implemented leg kicks to keep Larkin a safe distance away. The fact that it seemed like for every strike Larkin landed, Tavares would answer with three didn’t hurt him either.

Knowing he was down two rounds to none, Larkin still proved to be a threat in the third round as he turned the volume of his strikes up. If he had timed it better, he may have been able to knockout Tavares with the shots he was throwing but Tavares did too good of a job slipping away from them.

The fight would go on long enough to hear the final horn, signifying they went three full rounds.

Brad Tavares was awarded the unanimous decision victory. Tavares walked into the octagon as a two-to-one underdog. He is currently riding a five-fight winning streak.