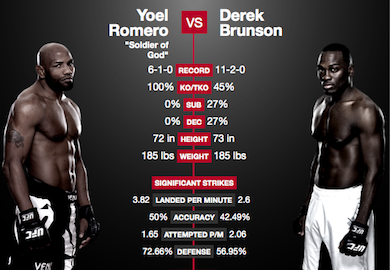 These middleweights did not shy away from throwing fight-ending shots.

It is known that Romero has knockout power, but what was unexpected was the fact that Brunson would be able to take the world-class wrestler down multiple times. He even slammed him late in the third round. Brunson would get the best of Romero in the first, landing bigger shots and more takedowns.

The pace of the fight changed in the second round as both fighters started to show a lower volume of strikes. Derek Brunson ate a punch to the groin and fell to the ground. It wasn’t a devastating low-blow, but it was enough to knock him on the ground. This gave both fighters a chance to regain some stamina in the middle of the bout.

Brunson ironically benefited from resting the most as he controlled most of the second. He took the olympic wrestler down for a third time and chopped at the fatigue of Romero by using his body weight to tire him out. By the time Romero made it back to his feet, the round was over and Brunson took another round back to his corner.

The fight took a complete 180-degree turn in the third round. Romero dropped Brunson with a huge left hand but Brunson was able to quickly recover. Seconds later, Brunson was dropped with a couple more left hands as he fell to the ground. Romero fell on top of him and started to throw serious shots, connecting with almost every other one. Brunson’s defense was to turn away and cover his face, but Romero intelligently switched his attack and elbowed Brunson’s ribs. After about ten unanswered elbows, the referee was forced to call a stop to the fight.

Yoel Romero defeated Derek Brunson by way of TKO (Elbows) 3:23 of Round 3