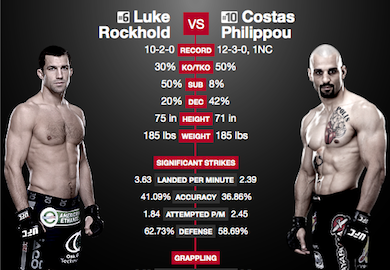 Luke Rockhold predicted he would win by utilizing his attacks to the body, and he couldn’t have been anymore spot on.

Albeit short, Rockhold’s performance in the first round was impressive. His ability to change levels in his attack is what led to Constantinos Philippou to some confusion when it came to blocking shots. Philippou was getting peppered with jabs and crosses early on which led him to block his bloodied head, and that left his body wide open.

With his back against the cage, Philippou absorbed a devastating left kick to the body and he crumbled. Herb Dean saw the pain in Philippou’s expression and quickly called an end to the fight.

After the bout, Rockhold requested a rematch with Vitor Belfort and asked for it to take place in the United States. “I’ll go through anybody I have to to get that, especially Michael Bisping actually. That’d be nice.”

This is Luke Rockhold’s first victory since losing to Vitor Belfort at UFC on FX 8 in May 2013.

Luke Rockhold defeated Constantinos Philippou by way of TKO (Body Kick) 2:31 of Round 1