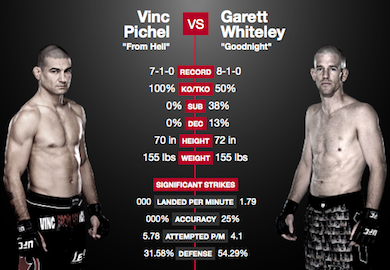 You could consider Vinc Pichel a knockout artist. Before the bout started, he held a record of seven wins and one loss; all of his professional victories came by way of knockout or technical knockout. With a striking defense percentage of 54%, Garett Whiteley should have been praying that he’d be able to dodge the knockout blow.

Vinc Pichel showed control throughout the fight however, as he heavily relied on his grappling to get momentum.

Both were quick to get to the center of the octagon, but it was Vinc Pichel that would control the octagon and dictate where the fight would go. Pichel chopped at the legs of Whiteley by executing perfect leg kicks and kneeing his legs when he was pressed against the fence. No significant shots were landed in the first round, but Pichel did take Whiteley down a number of times. It was enough to reward him round one.

Most of Whiteley’s strikes in the second round were blocked. Pichel would immediately counter with a punch to the waist or a brutal leg kick. One of Pichel’s knockout-shots connected but it didn’t end the fight. Whiteley’s mouthpiece fell out as a result of it, but he was able to keep his composure and tie up Pichel while he recovered. The takedowns started to add up again for Pichel in the second round except this time around, he incorporated ground-and-pound. Pichel used his grappling skills and overpowered Whiteley on the ground to ride another round to victory.

At the start of round three, Garrett Whiteley looked mentally defeated. His corner informed him he would need to end the fight in order to win, so Whiteley turned up the volume of strikes. Vinc Pichel picked up where he left off, however, by taking his opponent down and blasting him with big shots. He rode out another dominant round en-route to a unanimous decision victory.