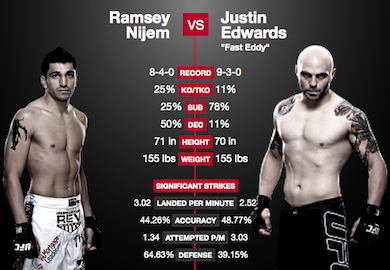 Both Ramsey Nijem and Justin Edwards landed decent shots throughout the beginning of the first round. Nijem left himself susceptible for counter punches as he threw combinations, and Edwards was able to take advantage of that. Nijem’s face showed that he was calm despite getting punched a few times, and he get his composure as he landed shots to the body. Nijem almost landed a jumping knee, but it seemed like his foot connected with the chest of Edwards more than anything. Nijem almost landed with a spinning attack but Edwards got the better of the exchange when he landed with a hook and a head kick. It seemed that Nijem was wobbling backwards, but he was just trying to catch his footing and balance. Just when it seemed like Edwards had the momentum, Nijem landed a couple combinations to give him some confidence. Edwards went for a takedown with five seconds left but Nijem almost locked him in an ankle lock. Luckily for Edwards, the horn saved him.

Edwards almost locked up the victory early on in the first round. Nijem slipped and fell to the ground and tried to recover by shooting for a takedown, but Edwards caught him with a guillotine. After some shifting of position, Nijem was able to escape and get back to his feet. Back in the middle of the octagon, Edwards pressed the action and he started to head hunt. Nijem tried to trip Edwards down and just as he was getting back up, Nijem landed a knee to the chest that hurt Edwards. Edwards was visibly effected and he ate shot after shot until he fell to the ground. Nijem ended up having back control where he locked in the body triangle that no-doubt aided Nijem in tiring out his opponent. He worked for a rear naked choke but he didn’t have the position to finish the fight. Instead, he stole the second round and it aided him in a close fight like this.

Ramsey Nijem walked back to his corner breathing heavily, but his fatigue didn’t seem to effect his performance in the third. Edwards showed some wear-n-tear with bruises on his eyes. Nijem’s signature left hook landed and wobbled Edwards a bit, but he stayed on his feet and kept pressing forward. Edwards went for a strike but Nijem ducked under it and landed a double leg takedown. With over three minutes left, he would have to look out for submission attempts from Edwards.

Edwards knew he may have to end the fight to win so he was quick to bring the fight back to his feet. Now bleeding near his left eye, Edwards’ demeanor seemed to have calmed down. His hands were low and his fists stayed close together. Fatigue was setting in. Despite the fatigue, Edwards landed a spinning back kick and Nijem was surprised it landed. Nijem landed two takedowns after the kick landed and that seemed to lock the win up for him.