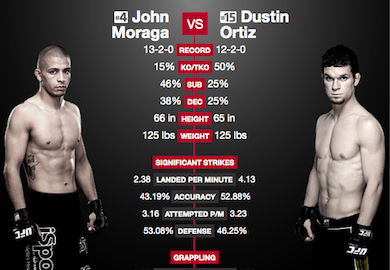 A lot of people questioned this bout when it was signed due to the rankings. John Moraga is number four while Dustin Ortiz is ranked number fifteen. Ortiz was quick to remind Moraga that numbers do not mean much in the octagon as he opened up the fight with a big right hand.

Ortiz proceeded to take Moraga down to the ground and landed short shots, leaving very little room for Moraga to work with. Ortiz eventually transitioned to half guard and threw elbows to make it look like he was staying busy; he didn’t want the fight to get stood up. Moraga was working for a triangle choke from the bottom but Ortiz broke it open with good posture. The end of the round saw Ortiz on top of Moraga in his guard, taking an early unexpected lead.

John Moraga started off the second round just as strong as Ortiz started the first. He stunned Ortiz with a big right hand but never really had a chance to end the fight. Ortiz slipped and fell to the ground after feigning a strike, which is when Moraga really started to run off with the fight. He almost landed a rear naked choke which turned into a crank, but Ortiz escaped. Moraga gave up position and Ortiz took to side control on top. After jockeying for position, the fight ended up back standing in the middle of the octagon where the rest of the round was essentially a stalemate.

Dustin Ortiz was in control for the entire third round. Moraga didn’t have much to offer in terms of striking as fatigue was starting to make an appearance. Ortiz outstruck and outgrappled his opponent.

The judges rewarded John Moraga the victory in the form of a split decision. Did the judges make the right decision? Share your thoughts in the comment section below!