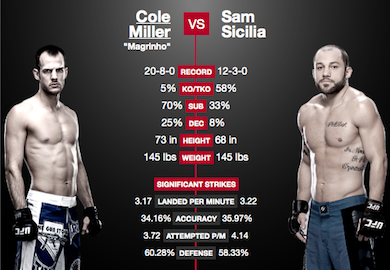 There was a big size difference for Cole Miller in this fight and he opted to use it to his advantage.

Miller’s reach kept Sam Sicilia at bay with jabs and teep kicks. Sicilia knew he was at a severe size disadvantage and made his strategy obvious: Dictate where the action went and back Miller up against the fence where he could land some big haymakers. Despite it being a smart plan of attack, it was transparent and Miller slipped by every hook thrown by Sicilia.

Sicilia landed a hook to the body but that was his only significant strike of the bout. As for Miller, his jab was proving to be very effective at keeping Sicilia just within reach. The round ended with Miller landing one of many jabs. The fight would see round two, but it didn’t last very long.

Cole Miller went right back to picking Sicilia apart with strikes until he dropped him with a huge right hand. Miller jumped on Sicilia, tried to trap him in a guillotine but couldn’t lock it in. He immediately transitioned to a rear-naked-choke and there’s no escaping that when Miller is on the attack.

Sam Sicilia submitted early on in the second round to give Cole Miller his tenth UFC victory.

Cole Miller defeated Sam Sicilia by way of Submission (RNC) 1:54 of Round 2