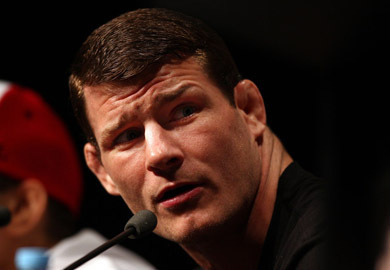 Last week we blasted out a tweet from British Boxer Tyson Fury. It was an attempt to call out UFC heavyweight champion Cain Velasquez.

The comments ignited the following feud between him and Michael Bisping:

“Everyone just ignore that excuse of a man, Tyson something. He’s trying to get hype, I’d never heard of him till he called out Cain,” Bisping wrote via Twitter on Friday.

“I always support British athletes of all sports, including Tyson Fury. I think he’s a great boxer,” Bisping told the UK Mirror. “However, if he’s calling out UFC heavyweight champion Cain Velasquez then quite frankly he’s living in a fantasy world and needs to come back to reality. He would be absolutely destroyed in a matchup against Cain. Cain’s a UFC champion and Fury wouldn’t stand a chance.”

“I hear I’d get killed by Velasquez. Not in a million years! think Michael Bisping is a first class pr**k! Him and Velasquez at the same time couldn’t beat me! My friend KO’d Bisping. Ask him.”