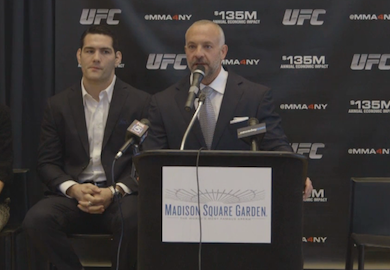 “I think we have to understand at the end of the day we are unlike other sports,” said Fertitta. “We are regulated and cannot be presumptuous in thinking we can just take away whatever authority [commissions] have and put it in our hands. It’s not that simple.

“You have to understand how state regulatory systems work. You have to work in conjunction with them. They issue us a license in order to promote events. It’s not like we’re putting on events on our own. We’re under their jurisdiction.”

“VADA has no jurisdiction over a fight. Whether a fight takes place, suspensions, a fighter license — it’s all relative to the commission. I don’t want to put words in their mouth, but they don’t want to be in a situation where a third party has done testing, they have no idea what happened and are then put in a position where they have to render a decision on something they had nothing to do with.

“The commission is more than willing to test for whatever. Georges just wants to make sure they are adhering to the level of a VADA, which I think clearly can be put into place. That’s not a problem.”

“We’re looking at all of those different options,” said Ferttita said. “We’re embracing whatever we can do to rid the sport of any performance-enhancing drug. It’s not like we haven’t caught people cheating in the past during fights we’ve unfortunately had to fill that role of regulator. When we go to these international territories, we’ve caught a number of people and they’ve been punished severely.

“[Random testing] is happening now. [The NSAC] just tested Vitor and I read they tested Palhares. It’s happening. I don’t know what else people want to do. You can’t have somebody standing outside every MMA fighter’s door, asking them to take a test. There’s only so much you can do, and I think they’ve done a pretty good job of grasping this.”

According to Okamoto’s account in the interview, Fertitta offered to financially fund any efforts by Athletic commissions to beef up their drug testing policies. But doesn’t feel the UFC doing it on their own is the proper course of action.