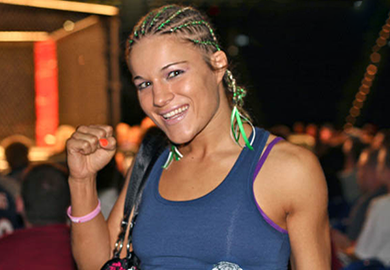 Felice Herrig just completed the filming of TUF 20, which will crown the inaugural women’s strawweight champion. Upon her return back to society she spoke with Fitness Gurls ahead of the release of her issue of the magazine which features several pictures as well as a cover feature.

You’re going to be on The Ultimate Fighter 20. This is the first time StrawWeights will be in the UFC. How big is this opportunity to not only be on the show, but to be in the UFC?

This is every fighters dream, and a few years ago women were not even in the UFC and Dana White said they never would be. Whoever wins the show will be the first ever UFC straw weight champion and that right there is huge. As much as I would love to win that belt and have been doing everything in my power to make this a reality I’m just really excited for this opportunity. Once again women are making history and no matter what I can always say I was the first set of straw weights in the UFC and on the very first cast of all women fighters on The Ultimate fighter. That in its self is an accomplishment. I”m not trying to focus on the outcome just the journey at this point. My mind is in a good place right now and at the end of the day I’m thankful to be living out my dreams and doing my passion.