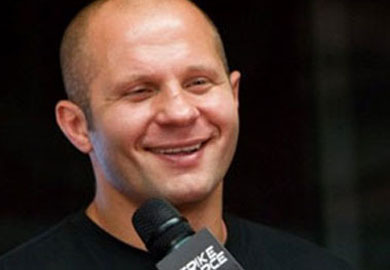 “Well, the UFC didn’t want me to fight there, so what could I do? We were unable to make a deal. They offered unacceptable conditions. Actually, when I fought in PRIDE, we had the best fighters in the world. Back then the UFC had a very serious and big crisis. They were going through some hard times being able to get top fighters. All the best fighters were in PRIDE. Later on, when PRIDE ceased to exist, the UFC didn’t immediately pick up speed. Currently, the UFC is a ‘super organization,’ in the world, probably the best. There are several top fighters in every weight category and in general it is hard to see the whole picture, I’d say. So there are some fighters whom it is interesting to watch, but the rest of them, well, it’s not interesting for me.”