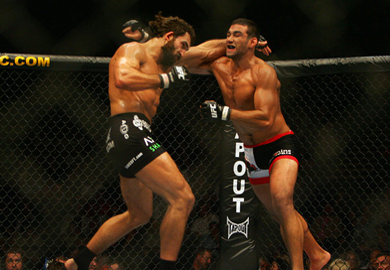 A loss in the UFC can sting. A knockout loss to a debuting future heavyweight champ in the first round, may sting a bit more.

Such is the case with Fabricio Werdum (17-5-1). The 36-year-old Brazilian says he is looking for a rematch with the man alluded to above, former UFC heavyweight champion, Junior dos Santos. The only problem is that dos Santos has an upcoming title bout with his nemesis, Cain Velasquez at UFC 166.

Werdum spoke recently about being offered to either wait for a title, or take a bout to stay fresh as he waits for the Velazquez/dos Santos trilogy to conclude: (via MMAFighting.com):

“I had a meeting with Dana White and the first thing he asked me was if I wanted to fight one more time or wait to fight for the title,” Werdum told MMAFighting.com. “I didn’t even think twice. I’ve waited for this opportunity for years. I will have to stay away from the Octagon for more time, but that’s not a problem. I will have more time to focus and train. I’m back to school. I always look at the bright side.”

Werdum stands undefeated upon his return to the UFC, defeating Roy Nelson in his return and most recently, submitting Antonio Rodrigo Nogueira in his native country of Brazil.

Werdum, who will commentate for the SPanish broadcast of UFC 166, also shared some thoughts on the heavyweight title main event:

“I believe everybody sees this fight like I do,” he said. “’Cigano’ has a great chance to knock him on in the first two rounds. After that, Velasquez’s cardio is excellent for a heavyweight.”

As for the rematch with dos Santos, Werdum stated that he has nothing against dos Santos, but would love to have the chance to avenge his highlight reel loss:

“Nothing against ‘Cigano’, but I want this rematch,” he said. “I thought I was the man at that time. I want to fight him again not because of him, but to prove to myself that I can beat him when I do things right.”

Werdum wasn’t totally resolute in his rematch with dos Santos, however, as a title fight with Velasquez means a chance at the coveted UFC heavyweight belt:

“My game matches with Velasquez’s,” he said. “I won’t be afraid to kick or punch him to avoid the takedowns because the ground game is my best weapon. I have a good guard and that’s what happened with ‘Cigano’ in their second fight. He didn’t attack with his boxing because he didn’t want to get taken down, so he didn’t attack and didn’t defend.”