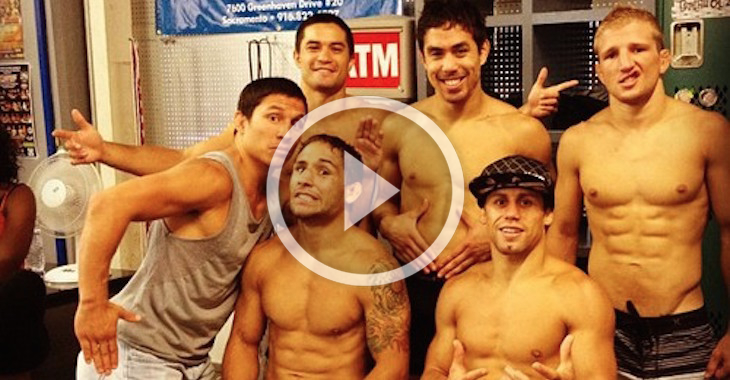 Miss the latest episode of Stud Show Radio? Shame on you. During Thursday’s episode of the popular MMA video podcast hosts Justin Buchholz and Chirs Carlino aka Sir Studboy broke down the latest in MMA news.

The colorful commentary of Buchholz and Sir Studboy is always entertaining and sometimes you might even learn a few things while listening every Tuesday and Thursday at 8ish p.m. PT. On Thursday the guys spent some time discussing all thing wrestling. From what style the olympics should get rid of to which counties have the best talent. During the conversation Carlino mentioned a wrestler who he had mentioned to Team Alpha Male leader Urijah Faber, saying that he should recruit him. This prompted Buchholz to chime in and give his thoughts on Faber as a talent recruit.

“Faber, the greatest eye for talent that the sport has ever seen? That’s right.

“I’m talking Mendes, Dillashaw–dude he pulled those guys, so think about this man, it’s a weird thought. T.J. had never fought when Faber recruited him, never fought. How can you watch someone and be like ‘this guy’s going to be a world champion’. Mendes never fought you know, he just recruited him because of his wrestling style or whatever. He was like, ‘oh I just like T.J.’s attitude’, that’s pretty crazy man, for a talent scout.”

It’s hard to argue that Faber has brought in some of the biggest names and some of the best fighters in the sport. But for arguments sake, anyone else have another choice for best talent scout in MMA? Sound off in the comments.

Watch this segment below: