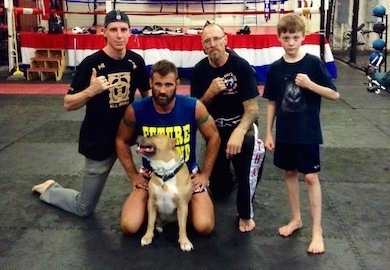 Former UFC and PRIDE veteran, Phil “The New York Bad Ass” Baroni, returns to the cage next Friday (July 25) to face Karo “The Heat” Parisyan on the main card of Bellator 122 in Temecula, California.

Baroni has been out of action ever since May of 2013, when he suffered a gruesome leg injury (dislocated ankle and broken fibula) in his ONE FC bout with the promotions current welterweight title holder Nobutatsu Suzuki.

While many people (including his doctors and coaches) thought that the injury would spell an end to Baroni’s mixed martial arts career, Phil never gave up hope and is now just a week away from making one of the more remarkable comebacks in MMA’s storied history.

Why is it such a remarkable comeback story you ask? Well first, here is the aforementioned injury that Baroni endured just 14 months ago. (GIF courtesy of Zombie Prophet)

That brutal break had doctors in Manila telling Baroni that he would likely never walk again without the use of a cane. However, thanks to former New England Patriots team physician, Dr. Watson (who performed the operation), and Mike Smith, who worked diligently with Phil on rehabbing is leg, “The New York Bad Ass” is back better and stronger than ever.

Baroni has returned to training at OKG’s (One Kick’s Gym), with coach Nick Blomgren, whom he had the best success of his career with.

The pair reuniting seems to have produced some solid results, as you can see in the video below:

In the video above, you will notice that Phil is wearing green arm bands above his biceps. Baroni wears the green arm bands to support the One Step Closer Foundation that works with his nephew Christopher, who is battling cerebral palsy. If you would like to make a donation to the charity, click on the following link http://www.onestepcloserfoundation.org.

BJPENN.com’s Chris Taylor recently caught up with Phil Baroni, who shared his thoughts on next weekends welterweight showdown with Parisyan. Here is the conversation:

Taylor: You are just one week away from making an MMA comeback that many people thought was impossible just 14 months ago. Tell me how excited you are to get back in the cage.

Baroni: Man, I’m just grateful to be back bro. You know, it’s been a wild ride. I know I always bring it up, but man sitting in that hospital in Manila being told my career was over and shit last year. That was brutal. To be back and fighting on the main card of Bellator against a guy like Karo, I’m just really happy.

Taylor: The last time I saw you was at One Kick’s Gym in Las Vegas, which is where you have done most of your training for this fight. What can fans expect to see from Phil Baroni under the tutelage of coach Nick?

Baroni: It means everything to be back with One Kick man. That guy believes in me more than anyone and has always had my back. After my loss at UFC 51, I was down and out. I thought my career was over. I started working as a host at Spearmint Rhino in Las Vegas, haha you know what I mean, I was working at a strip club.  Nick came and got me from there, convinced me that I was not done and to come back and train under him. I agreed and eventually fought at a small event that Mark Coleman put together. I smashed my opponent there and the next thing you know I am in Japan main eventing PRIDE and winning fights again.

So, as soon as I got the cast off my leg, I drove straight to One Kick’s gym. He welcomed me back with open arms and we began taking my deteriorated body and transforming it into the bad ass machine it is now. OKG is not like your big Vegas gym’s you know. Not like it is not nice, but it is not a big gym like Extreme Couture or something. It is a rough gym full of hungry young fighters man. A fighters gym is what it is. We bleed, we sweat and we train real hard there man. I think every fighter out there is hungry, but at OKG’s man we are starving.

Taylor: Your opponent at Bellator 122, Karo Parisyan, recently made some comments regarding your wrestling abilities, more less stating he believes you are only a threat to him while standing up, what is your response to that?

Baroni: I don’t know if he’s trying to talk himself up or what. I’m sure he’s trying to convince himself of that. Look man, I’ve been fighting since UFC 30. I wrestled division 1 in college. I kick-boxed professionally, where I had like 10 knockouts. I have a brown belt in BJJ. I’m no one trick pony bro. I can beat this guy standing up, on the ground, wherever. Obviously, I am the bigger and stronger athlete and I take much better care of my body than he does.

Taylor: With that said, what is your gameplan for this fight with Karo.

Baroni: Go out there and fucking fight. Shut him down everywhere. I am gonna dismantle him. I’m not a tricky gameplan mother fucker, I am coming to fight! I am going to fuck you up.. That’s my gameplan, so try and stop it!

Taylor: When I saw you earlier this month you were looking very lean and talked about a potential move to lightweight after this fight with Parisyan. Is that still the plan?

Baroni: Lightweight is where I am heading. But, I’ll go anywhere, 185 whatever. For the right fight, I will fight at whatever weight. I am all muscle and teeth man. I’m a great white fucking shark.

Taylor: Anyone you want to thank ahead of next weekends bout in California?

Baroni: I want to thank Garden of Life, who War Machine hooked me up with for supplements. They are awesome. Of course I have to thank Lana’s Egg Whites, after my injury all I ever ate was Lana’s Egg Whites. I literally ate it all the time man. Ate it, drank it, fried ’em, boiled them, everyway you could think of I had them. I want to thank Bjorn Rebney for giving me the shot in Bellator and although he’s gone, I’m very excited to work for Scott Coker again. I love Scott Coker man, he always treated me awesome. To all my fans, tune in to Spike TV on July 25 and support the good guys!

Taylor: Thanks again for taking the time Phil, and by the way congrats on the growing success of your clothing line Future Legend. Best of luck to you next Friday night my friend.

Baroni: Ya, the clothing line is doing real good. Thanks bro!