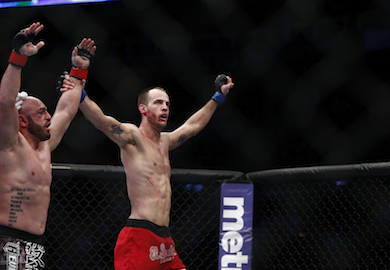 In August UFC featherweight Cole Miller came on BJPENN.COM Radio to announce he was contesting his decision loss to Manny Gamburyan at ‘UFC Fight Night: Shogun vs. Sonnen.’

His argument was that he actually stopped Gamburyan in the first round, but due to some misguided officiating, the bout was allowed to continue, which led to his eventual unanimous decision loss.

Last Friday we had the other interested party on BJPENN.COM Radio to give his take on the event and he addressed Miller directly while wondering, ‘what the hell’ he’s thinking.

“Let me tell you one thing; I don’t know what Cole is thinking. I mean, Cole Miller is a cool guy. I like him. He was on the TUF show with us, he was a cool dude, he was a great athlete, he was a good jiu-jitsu guy. But to be  honest, I just want to ask him a question; what the hell is your problem, dude? He elbowed me in the back of my head twice. It was kinda of pretty bad.

They should have taken a point off of him, to be honest. Like I’ve said, it’s not a chess game it’s a fight game. Anything can happen. Let’s be real. I won’t be a sore loser, I promise you. When I lost the Jose Aldo fight I said, you know what, the guy is a beast. I lost fair and square. After I fought Tyson Griffin I never thought I lost the fight. Then after that I fought Diego Nunes and I never thought I lost that fight either.

I should be 4-0 now after the Jose Aldo fight but it is what it is. It’s MMA and its UFC judging, it kinda sucks. To be honest, it’s a new sport. I want to congratulate Dana White and the Fertitta brothers for the 20th anniversary. It’s been many years and they’ve been working hard but to go back to my last fight; fair and square I won that. I’m not looking for a rematch, I’m looking for bigger fights and bigger things.”

The interview with Gamburyan also covered his upcoming fight against Dennis Siver, his little sister figure in the sport, Ronda Rousey and his coaching stint on TUF.

If you can’t wait for part 2 of this interview to come out, just hit play below and give it a listen.