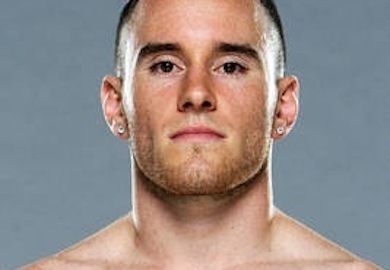 Here is what Louis had to say about Week 3 of his ‘TUF’ experience:

The episode starts with the coaches coming to visit after Julianna’s victory! It was always nice to have the coaches come in and hang out with us. Anytime we had any distraction from the long hours in the house it was nice. Even just to have new people to shoot the sh*t with. We knew the coaches on a professional/coaching basis, but it was nice to get to know them more and more on a personal level.

It was hard going in to every fight knowing one of your friends would win and one would lose. Of course I was always cheering for my teammates, but it’s tough to want to see your other housemates lose. Regardless of what team they were on, it’s never easy seeing one of your friends lose. The longer we stayed in the house the harder this got. You create these bonds with people regardless of which team colors they wear.

This is the first we see of any drama in the house. This time it’s surrounding Julianna. We were SURE that someone had leaked our match-ups to the other team. Julianna being somewhat of an outcast, we automatically pointed the finger at her.  Clearly as we see now, Jessamyn had just guessed. No big rat in the house, no big back-stabbing. Just a simple guess that happened to be bang on.

It’s funny how being in a house with 15 strangers can really play with your head. Sometimes you think people are talking behind your back, sometimes people are stealing your food. Or in this case someone told the other team our strategy.

This leads us up to the fight. Training with Holdsworth, he has some of the best Jiu-jitsu I’ve ever seen. I think for that reason people were really underestimating his stand-up. I had got the chance to spar with him, so I knew he used his range really well and that he had some decent power.

Chris Beal on the other hand, was known mostly for his boxing. I hadn’t seen much of his fight to get in to the house, but everyone seemed to think he had the best striking in the house. Watching the fight I was pretty confident Holdsworth would take it. I just thought it would go to the ground and end there. I don’t think anyone really expected Holdsworth to drop Beal…

Regardless both guys fought hard and put on a great fight. Unfortunate that one had to win and one had to lose. The Holdsworth win leads us up to one of my favorite lines of all season: “THAT’S WHAT YOU GET FOR  EATING BISCUITS FOR BREAKFAST”. Our nutritionist Eric had heard that Beal had had his pre-fight breakfast as per usual. Bacon, eggs, and biscuits. Apparently that didn’t sit well with Eric.

There’s a little more to the story than that. Holdsworth actually lives with Eric in California. Eric cooks his meals and lets him live at his house. Knowing that, I get that Eric was very emotional to see basically his adopted son win! Some people get a little reved up when it comes to fights! Either way Team Tate keeps control for another pick!!!

On next week’s episode, we once again have the classic “striker” vs “grappler” match-up, this time featuring Jessica vs. Roxanne!