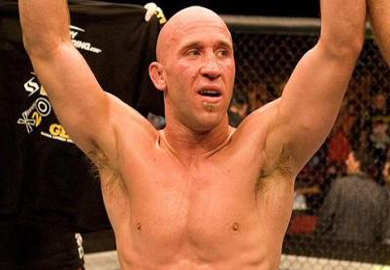 The World Series of Fighting held their second show Saturday, March 23rd, at the Revel Hotel and Casino in Atlantic City, New Jersey. On the card was a wealth of talent from several divisions.

In a main card fight, former WSOF welterweight Josh Burkman fought Aaron Simpson in a fight with title implications. Burkman made sure to make this one a one-sided affair and put Simpson away early in the fight with a brutal first round knockout that made the Revel Hotel Ovation Hall share a collective gasp.

After the fight, I caught up with Burkman to get his take on the fight, his performance, and title fights (possibly with Jon Fitch) in the World Series of Fighting.

Adam Conklin: Even after a spectacular first round knockout like that, is there anything that surprised you about Aaron’s game?

Josh Burkman: Not really, I felt really comfortable in there. When we started moving, I found my distance real early and then it just felt like I was guided in the right direction. One thing I try to do when I’m in there is find my rhythm in the fight. Sometimes that happens instantly. If a guy puts on too much pressure then I’m gonna fight, and I was able to find my rhythm really fast and I just got comfortable and I think that took Aaron out of his game. I didn’t let him get settled in what he wanted to do.

AC: You defeated Gerald Harris, and just scored a 1st round knockout, and considering you want Jon Fitch to earn his title shot, do you think this makes the number one welterweight in the World Series of Fighting promotion?

JB: There’s no other welterweights (in WSOF) that have won two fights in a row against guys that aren’t in the UFC. Gerald Harris had a winning record in the UFC, Aaron Simpson had a winning record in the UFC, and if we’re building this promotion with the fighters from within, I think I’ve done more than any of the other welterweights. Even my record outside of the WSOF, I got on a nice run and I’ve beat some good guys. Someone has to start the title talk and I figured I’d be the first one to do that and I don’t think I would be able to do that without a dynamic win over Aaron Simpson.

AC: Who do you think should face Jon Fitch for number one contender status and is at that high-caliber of the sport to face Fitch, with a win granting them a fight with you?

AC: In a fight where you weren’t in any kind trouble on the feet or the mat, what do you look to improve on most, even after a near perfect performance?

JB: First thing I’m gonna do is take two weeks completely out of the gym and spend some time with my son and my wife and then I’ll get back at it. One thing I really wanna work on is to continue to work on my hands. Continue to work on my strikes and putting my combinations together. I always work on my wrestling and jiu-jitsu at Pit Elevated. We have a great team, Court McGee and Ramsey Nijem. Just a good group of guys. We always help each other get ready for fights and that’s what keeps me on a higher level, getting those guys ready for their fights.