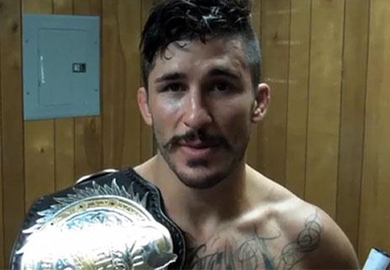 I recently did an interview with UFC flyweight Ian “Uncle Creepy” McCall, we chatted about his future in the sport, future opponents, how he got his start in MMA, and much more. Ian’s responses are italicized.

ES: First off Ian thanks for taking the time to do this interview, I really appreciate it. My first question has to deal with something I’ve been following closely, Louis Gaudinot has been talking up some trash, how did that all start?

“He called me out man, he’s got good boxing but his ground game is horrible, it fucking sucks. I’m in a weird spot, I’d accept his challenge but he’s already got a fight.”

ES: If you could pick, when would you fight next?

“July, I’d have just enough time to get ready for it, July would be perfect.”

ES: You did a Q&A and said that you usually walk around at about 140 pounds, is that weight cut down to 125 hard for you?

“I actually walk around at about 145-150, but I’m constantly training so I’m always about that weight, I still have to cut though, it’s hard, it’s a chore you know, half the battle is cutting weight but a fights a fight, it’s part of the preparation, but yeah weight cutting is difficult.”

ES: With that weight cut being as difficult as it is have you considered working with Mike Dolce? I know he helps a lot of fighters cut weight.

“Yeah I’ve talked to Dolce a few times about it, but I have my own guy Corey Beasley and he’s got me, I’ve never not made weight, so I’m fine.”

ES: Would you want to have a rematch with Joseph Benavidez?

“Of course, I’m sure I’ll fight him again sooner or later, I feel like Demetrious, Joe, and I are above everyone else in the weight class.”

ES: John Dodson is coming off a decision loss to Demetrius, would you be interested in a fight with him?

“I’ll fight anybody, I don’t care who, I’ll fight anybody. When Frankie Edgar was fighting Jose Aldo and Aldo got hurt I said I’d fight him. I’ll fight Frankie, what’s the worst that happens? I get beat up on national TV? It’s happened before *laughs* ”

ES: I remember on Facebook you had posted that you were doing private lessons, would coaching be something you’d be interested in down the line?

“Yeah, eventually, I’m just trying to focus on me right now, I’d never want to open a gym, too much BS behind it, but I love coaching, you know I’ve been doing this for so long I have a deep love for it, coaching would be awesome.”

“ES: The UFC has been talking about considering a new division at straw-weight what are your thoughts on that?

“I’d love to see it, I’ve got two good guys that would do it, Anthony Frank who’s 25, he’s really good, and Romie Adanza, he’s 34 and has four belts in Muay Thai, like serious titles. He’s the best Muay Thai guy that America has seen, American born not like moving here from Thailand. There’s never been an American that’s top 10 under 140 pounds, it’s always the Thai’s, and he has a chance to do that, he’s incredible. He fights at 125 pounds and he drinks, smokes, eats grizzle and he’s so god at what he does…sucks to feel it and be on that end of it *laughs*. He fights in the next few weeks at Rajadamnern, and he’s fighting a guy who is a champion in Thailand, and he’s coming over here to fight Romie.”

ES: I’ll have to find a way to watch that, sounds like it’ll be a good fight! Going back to your future fights, would you consider ever going up in weight?

“If there was a fight available then yeah, I’m focused on my weight class right now.”

ES: Coming from someone with experience, how do you think Anthony Pettis will be with his weight cut down to 145?

ES: Who do you think will win that fight?

“Pettis looks good but I don’t know if he can beat Aldo, we just need to see the old Aldo. Don’t get me wrong he was crazy before, double jumping someone in the face! The guy is a freak, it’s so rad! I don’t know though, Pettis seems to be doing crazy shit to other people. I want to figure it out before I watch the fight. Pettis just makes people look stupid man.”

“ES: Dominick Cruz said you were the best technical wrestler he’s ever faced, have you considered trying out for the olympics or anything like that? like how GSP considered it

“You know someone actually just asked me this as far as Olympic team trials go – at my weight class, whether it’s Freddie Roach in Boxing, or going to Abu Dhabi, I’m good at what I do, but when you break it apart, I’m not world class in anything. If I went to try to make the national team they would purposely fuck me up, that’s why a lot of wrestlers laugh at GSP. Theres a bunch of dudes my age or older that want to kick my ass, maybe I’m the best technical wrestler, maybe MMA wise people think that, I don’t know, maybe I could make it, I screwed up a lot in high school, maybe I could’ve been a world class wrestler.”

Stay tuned to BJPENN.COM for part 2 of this exclusive interview.