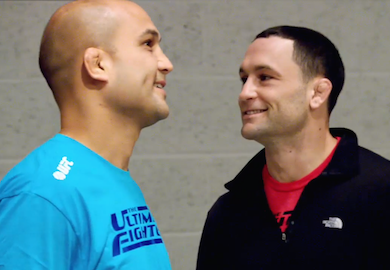 UFC legend BJ Penn made his return to The Ultimate Fighter this past Wednesday. Penn, who is coaching against Frankie Edgar on TUF: 19, was a coach on the shows 5th season back in 2007. The former UFC welterweight and lightweight champion recently spoke about this seasons premiere episode and how he felt about returning to TUF, “It really does feel like déjà vu or something like that, either way I’m enjoying it.”

Penn and Edgar have fought twice inside the octagon and will meet for a third time at this season’s finale event, scheduled for July 6. Echoing the statements made during Wednesday’s premiere, Penn had nothing but kind words to say about seeing his opponent, “He’s a good guy and always pleasant to see outside of the octagon,” Penn added, “Plus I got to size him up a little.”

During the first episode both coaches sat with UFC president Dana White and went through the evaluation process while watching fighters try to win their way into the house. Like previous seasons of the show, there were fighters who looked like they could be in the finale now and those who will have to develop along the way if they want a shot at winning the show, “My first impression when I was watching the elimination fights was that the talent level wasn’t that high,” said Penn, who added “but as time goes on I can see some of these guys doing very well in the UFC.” Penn should know, he coached the likes of Joe Lauzon and Gray Maynard during the fifth season and both fighters are now staples in the UFC. Fans also witnessed a former Bellator MMA champion lose in his fight to get into the house. Lyman Good, who was the inaugural Bellator welterweight champion failed to even make it into the house, which surprised the coaches and gave Dana White plenty of chances to take shots at the competing promotion, “I feel bad for Lyman on this one,” said Penn, “He’s a good fighter but got stuck in a bad match up for his style. Like every fighter he has to evolve to get to the top.”

A Facebook fan was given the opportunity to provide a question about TUF for Penn to answer. Bobby Jones Jr. was curious as to whether Penn planned any pranks for Edgar or his team. “I mostly focused on the training,” answered Penn, but then added, “I’m sure there are a lot of twists that even I don’t know about.” Fans will have to stay tuned this season to see just what kind of twists happen.