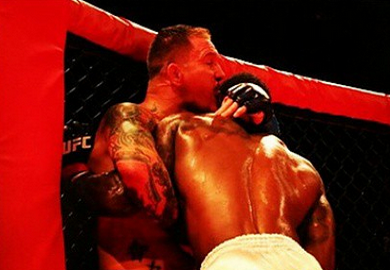 Team Alpha Male took to Twitter to cry foul, saying Lester bit Roberson’s ear during the fight, posting pictures of the injury, as well as a picture of the incident.

Last night #tam fighter Dj Roberson was bit multiple times on the ear. His opponent Frank Lester must of been really hungry… The ref didn't take one point even with repeated groin shots. DJ was on the wrong end of a split decision that was BS. #EARgate #LesterTheEarMolester

Lester gave an exclusive statement to BJPENN.com’s own Anton Skoro regarding the incident, saying:

“There’s nothing to say. This kid DJ faked like I kicked him in the nuts multiple times bc he got scared in there after I dropped him with a HEADKICK in the first round. He was scared and faked low blows. He also stabbed me in the eye ball and cut my eye with his finger nail. I’m more than happy to rematch him anytime.

And him and his team wanna act like I’m the one who fought dirty. Kid got rocked with a headkick, got scared and fuck, and than pretends like I kicked him in the nuts so he could take 4 mins to recover from the headkick I just landed.

Fuck those dudes crying at TAM. You’re boy played DJ got pieces up and faked a bunch of bullshit kicks to save his own ass

You know what’s funny is DJ was 100% cool afterwards. We talked hugged it out and gave each other respect. It’s his corner who was talking shit. And that’s bc DJ knows I won that fight fair and square. I told him and the promoter, if you think that was a bad decision let’s run it back. I took that fight on a weeks notice! He was training for months. And I still won in his hometown. I’ve never been accused of fighting dirty in MMA. I traveled to his hometown, on a weeks notice and fought hard. I didn’t cheat. I made weight. And it was hard task. He hit me with a good elbow in the clinch and got my nose bleeding and I congratulated him on that. He needs to do the right thing and be honest about those “low blows” that were legal leg kicks. It’s BS man. But it is what it is, I do t hear DJ talking a bunch of crap, I hear his team talking a bunch of crap bc they expected him to win and he didn’t so they are making excuses.”