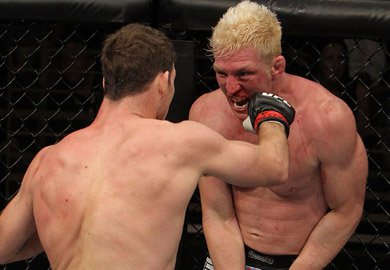 Recently released UFC fighter Jason ‘Mayhem’ Miller was reportedly arrested for breaking into a church, while naked, and emptying a fire extinguisher into the air.

“Ex-UFC fighter Jason “Mayhem” Miller was arrested today in Orange County, TMZ has learned — after allegedly breaking into a church, spraying a fire extinguisher all over the place, and getting buck naked.

Miller is coming off of an uninspiring decision loss to C.B. Dollaway at UFC 146. He was released from the promotion after the fight following a poor stint in the UFC after coaching the 14th season of the Ultimate Fighter reality show. Miller was also involved in a scene post-fight that was never fully disclosed to the public, further worsening relations with the UFC.
Miller is certainly making of the most of his retirement and living up to his nickname in an odd story that leaves a bad taste in the mouths of MMA fans.
For updates on the world of MMA stay tuned to BJPENN.com for the latest news.
This article appeared first on BJPENN.COM