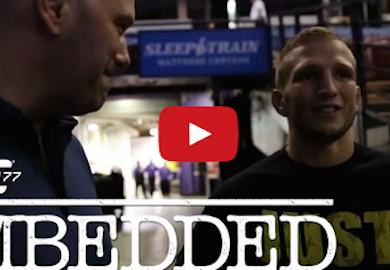 On episode 4 of UFC 177 Embedded, the cursed fight card becomes a Cinderella story as the main event changes on weigh-in day. Title challenger and former champ Renan Barao bows out for medical reasons, creating a once-in-a-lifetime chance for Joe Soto, a former belt-holder in other organizations about to make his UFC debut on the prelim card, until he got the call that would change his life. TJ Dillashaw proves he’s a company man and true champion willing to fight anyone, anytime by accepting a new challenger on one day’s notice. UFC President Dana White lambastes the negative media and implores his fighters to seize the opportunity to prove all the doubters wrong. UFC Embedded is an all-access, behind-the-scenes video blog series focusing on the days leading up to the UFC 177 bantamweight title fight, Saturday, August 30th on Pay-Per-View.