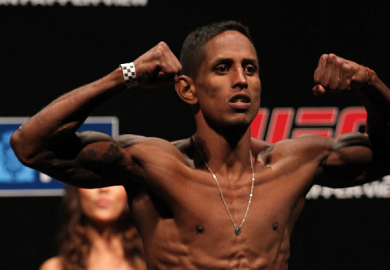 Johnny Eduardo has been forced to withdraw from his upcoming UFC 158 bout with Yves Jabouin March 16th due to injury. Eduardo tweeted that a shoulder injury is the cause of his withdrawal.

The UFC hasn’t announced whether or not they will find an opponent for Jabouin on such short notice.

Eduardo is 1-1 in the UFC, most recently coming off a unanimous decision victory over MMA veteran Jeff Curran.

Jabouin is 3-2 in the UFC, coming off a loss to Brad Pickett in September. Before that loss Jabouin was on a 3-fight win streak.

Stay tuned for updates regarding a potential new opponent for Jabouin.