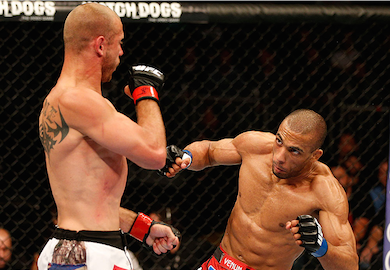 “… After my fight with Cerrone, I realized I’m at their same level. I can easily fight anyone (in the top 10). I want a well-ranked opponent, and I will be ready. If I do my game, I can beat anyone. I want to test myself against anyone ahead of me in the rankings, especially Cerrone. If they give me another fight with him, the result will be completely different. He was scheduled to fight the Russian, but the fight is off. Who knows, maybe the UFC will give me another opportunity to fight him. I’m sure it would be a great fight.”

The two originally squared off in April and the fight wasn’t close (see picture). Is a rematch warranted?