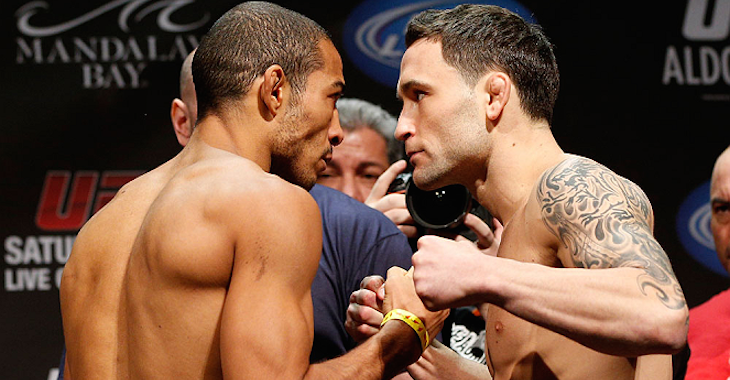 Frankie Edgar will be stepping into the octagon this weekend to face “The California Kid” Urijah Faber in what could be a title eliminator. If “The Answer” walks out of the cage with his hands raised, he wants another shot at the UFC Featherweight Championship.

“I do believe if I take care of business on May 16 that I’m the guy that will fight the winner of Aldo and McGregor,” Edgar told UFC.

Edgar hasn’t lost since fighting Jose Aldo at UFC 156 and is currently riding a three fight win streak. He last beat Cub Swanson and was hoping for a shot at the title afterwards, but Conor McGregor was able to leapfrog him and take the shot for himself.

“I beat the No. 1 contender pretty handily my last fight. I was hoping that was going to be enough to get me that title shot, but McGregor did a good job of putting away everybody he’s fought and promoting himself the right way to get that title shot.”

Should Frankie Edgar fight Jose Aldo for a second time with a win over Urijah Faber? Share your thoughts in the comment section below!