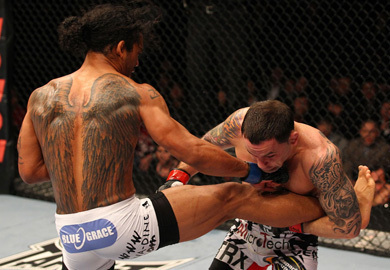 Having spent 50-minutes of cage-time with the current champion, former champ, Frankie Edgar, has voiced his commitment to the Gracie family on Sherdog Radio and offered up assistance to the man who is next-in-line, Nate Diaz.

Check out what Edgar had to say:

“If Nate would need my help or would ask for my help, I would love to help him out. We got some work in last time that was really good. If I could help him out, of course I would.

I just think that Nate comes forward so much, I don’t know how Ben will deal with that…Nate’s length. He’s got great, great jiu-jitsu. I feel the wrestling edge will probably go to Ben, but if you look at Nate’s last performances, he’s gotten so good everywhere. He fought Jim Miller, and Jim Miller couldn’t take him down. Jim Miller’s a pretty high-level wrestler too. I think Nate’s definitely a great match-up for Ben.”