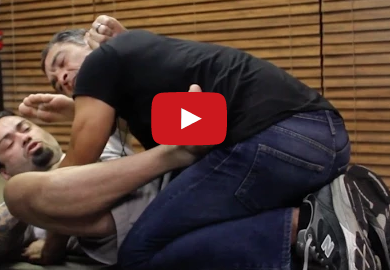 For those who don’t understand what a groundbreaking moment this is for JiuJitsu, let me explain. Rickson Gracie, the son of Helio Gracie, is the ‘head honcho’ of Gracie Jiu-Jitsu in today’s time. Eddie Bravo on the other hand, has been on the receiving end of harsh criticism for his unorthodox style of Jiu-Jitsu, which doesn’t use the traditional Gi. Bravo calls his style “10th Planet Jiu-Jitsu”. Eddie Bravo basically invented a guard that he adapted for Jiu-Jitsu in MMA called the ‘Rubber Guard’.

Here Eddie Bravo can be seen demonstrating the Rubber Guard to Rickson, who not only sounds interested, but agrees with much of what Bravo is saying.