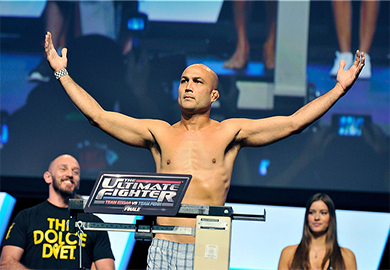 10th Planet Jiu-Jitsu founder Eddie Bravo posted a thred on The UnderGround calling for BJ Penn to return to the UFC for one more fight, but with some changes.

That crazy strategy should retire not BJ.

Kill the feet on hips guard.

Kill the flat on the back defensive butterfly guard.

35 is not old. He’s in amazing shape. He didn’t lose because his body is breaking down. He lost the way he did because of that strange strategy. The whole world was confused.

He should stay at 145, and fight a couple of mid level guys to get his confidence back and I truly believe, with the correct/proper training camps, he can still beat some of the best at 145.

And of course I would recommend an offensive clinching guard when on his back. Not one arm bar, Oma plata, Gogo plata, or triangle attempt by BJ. Vitor went after Jones off his back, Pettis went after Benson, Anderson went after Chael, even Tito went after Machida off his back, there’s no reason BJ can’t attack off his back.

Just my opinion, I’ve never done MMA so what do I know, I could be way off. These are just my thoughts, thank you for taking the time to read this 🙂