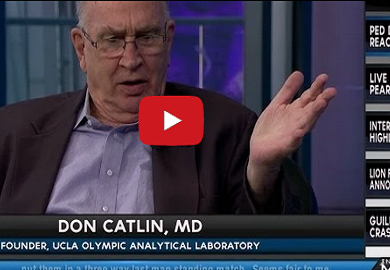 Dr. Don Catlin, arguably the most qualified person to speak about TRT, did so on Inside MMA with Bas Ruten and Kenny Rice to discuss the results of Chael Sonnen’s failed drug test last week. For those who don’t know Dr. Catlin opened the first anti-doping lab in the US back in 1982, which also serves as the UCLA Olympic Lab, which is the largest PED testing facility.

Kenny Rice asked Dr. Catlin if he believed the drugs Sonnen was taking compared to TRT.

“It’s really not the same. He has stopped TRT. He stopped everything. And now he needs to wake up his system – it’s suppressed… So he’s doing what he should do medically, to get his system revised. But the trouble is, what he’s using, is blocked and banned by the sport.

“So he gets caught with that, when all he’s trying to do is be normal again.”

However Dr. Catlin also serves on the committee that Olympic athletes petition to take TRT and had the following to say.

“In the Olympics there are lots of men that try to get approval to use it. But they have to pass through a committee which I am on, and they never pass. We never let them in. So we never give anybody the approval to use testosterone, because we know it’s fake.”

“I know this field. I’ve been doing it for 25-30 years, and I know that all the men that come in and say that they have Hypogonadism are fibbing. Period.”

Although arguably the most controversial part of the interview came when co-host Kenny Rice said that fighters who come on the show say TRT isn’t a steroid, but every doctor they’ve had on the show said it is, to which Dr. Catlin responded:

Check out the full video below.