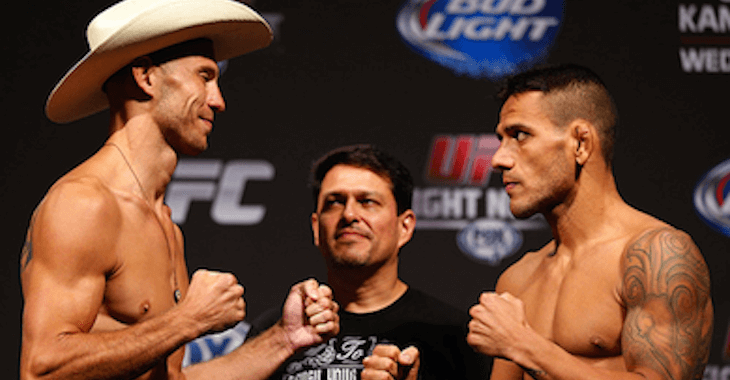 UFC lightweight champion Rafael dos Anjos is preparing to defend his title for the first time, when he takes on Donald Cerrone at UFC on FOX 17, on Dec. 19.

The two have met in the octagon before, with Dos Anjos getting the win, and now look to square off again, this time for the UFC title.

There’s been some interesting talk between the two leading up to the fight and in a recent interview with Combate, the champ said he plans on not wasting time and getting the KO win over Cerrone early.

“I hit him with a good hook in that dropped him in the first round. In this second opportunity, he won’t get up if I hit him again. I’m going for the knockout. I don’t work overtime in the Octagon. I’ll do my best, I’ll get ready to keep my belt. I’ll try and finish the fight as fast as possible.”

How do you see this fight playing out? Both fighters have been on tears lately, taking out everyone put in front of them, so it’s bound to be an exciting fight.