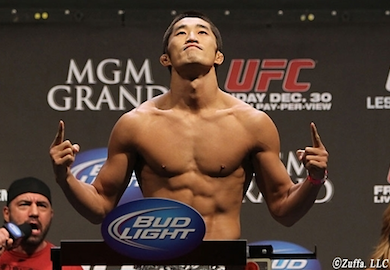 The 26 year-old Englishman, John Hathaway, burst on to the UFC scene scoring 4-straight victories inside the octagon, which included wins over Diego Sanchez and Rick Story respectively. At UFC 120 in October of 2010, Hathaway suffered the first defeat of his MMA career, a decision-loss at the hands of veteran Mike Pyle.

The loss to Pyle seemed to motivate the former rugby player, as Hathaway has since strung together three-straight victories. Those wins have come over opponents Kris McCray, Pascal Krauss and most recently John Maguire this past September.

Meanwhile, Dong Hyun Kim has gone 9-2 inside the octagon since making his debut with the organization back at UFC 84 in May of 2008. Kim has earned victories over some of the welterweight division’s most elite fighters, including Matt Brown, Siyar Bahadurzada and Paulo Thiago. Kim’s most recent effort saw him take home the evenings “Knockout of the night” bonus, for his brutal KO of Erick Silva this past October in Brazil.

“The Ultimate Fighter: China” is currently airing on Liaoning Satellite TV in China. Former Strikeforce middleweight champion, Cung Le, is the acting coach/advisor for the featherweight and welterweight cast members.