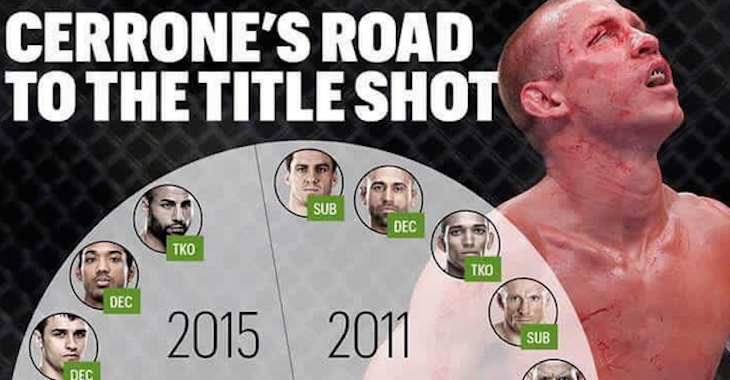 Before WEC merged with UFC in 2010, smaller fighters always had the stigma that they could not consistently provide exciting fights. The fact that WEC became such a commodity that UFC eventually absorbed it proved the theory to be a myth as fighters like Jose Aldo, Dominick Cruz, and Urijah Faber have put on some of the most exciting fights in recent memory.

No other WEC alum stands out more than Donald “Cowboy” Cerrone, however. Whether it’s because of his fighting style or his never-rest attitude, Cerrone has quickly become one of the most popular fighters the UFC has to offer regardless of weight class.

UFC fans’ introduction to Cerrone was no different than the rest of his fights; It was an exciting brawl that ended with “Cowboy” picking up a submission win in a fight of the night performance. Cerrone would go on to win three more fights before facing his first top-tier opponent in Nate Diaz where he suffered his first loss in the UFC.

It didn’t take long for Cerrone to bounce back, though, as he picked up consecutive wins at the expense of Jeremy Stephens and Melvin Guillard. “Cowboy” would only go on to lose two more fights (Anthony Pettis, current champion Rafael dos Anjos) and is currently riding an eight fight win streak that includes wins over former champions Ben Henderson and Eddie Alvarez.

His most recent victory came at the expense of John Makdessi at UFC 187 where Cerrone finally secured a shot at the UFC Lightweight Championship. Check out Cerrone’s path to the gold:

Who do you think will win the December meeting between Cerrone and Dos Anjos? If Cerrone loses, should he move up to welterweight? Share your prediction in the comment section below!