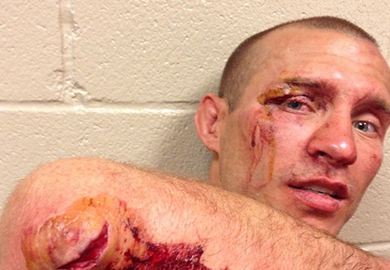 UFC lightweight Donald Cerrone has reportedly been charged with a Misdemeanor Assault in a Colorado boating incident that escalated out of control.

Cagepotato.com was the first to report the incident.

Cerrone is scheduled for the UFC Fight Night 27 co-main event next week against Rafael dos Anjos. The fan favorite is known for his ‘life-on-the-edge’ mentality outside of the Octagon and that has apparently led to him crossing paths with another boating enthusiast who was ‘raging’ on a lake in Colorado with him.

Here is the official statement from the local authorities:

“Donald A. Cerrone, 30 years of age, has been charged with Third Degree Assault by a summons to court, and it is a Class One Misdemeanor. There is no warrant for him at this time. Mr. Cerrone and another person, Jeffrey S. Aley, were involved in a boating rage incident (similar to road rage but by use of boats) on Lake Granby. The incident escalated to the point where Mr Cerrone assaulted Mr. Aley. Mr. Aley was also charged with Reckless Operation of a boat and Reckless Endangerment, a Class Three Misdemeanor. The case is still ongoing, and has not been concluded in court.”