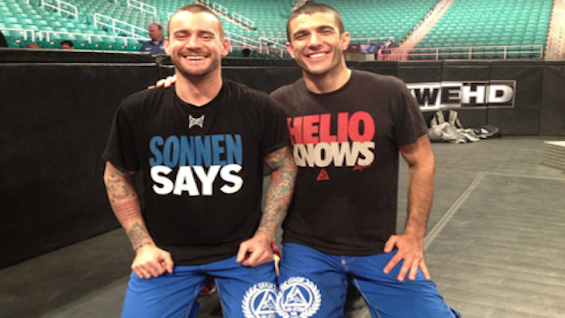 MMA legend Don Frye is never one to shy away from giving his opinion. In a recent interview, Frye spoke about the hot topic in MMA that everyone is discussing, the signing of CM Punk.

Some fighters have been very critical of the signing of CM Punk, who’s real name is Phil Brooks, while others like Cole Miller think fans will be surprised at his abilities.

Frye is taking the critical approach.

“I thought he pulled out like 4 hours after he signed the contract. I thought maybe the common sense fairy came by and tapped him on his shoulder and said ‘hey dumbass, this isn’t WWE’. I mean god damn it, who’s that big blonde fairy who has the belt for the WWE – from North Dakota, or South Dakota, or one of them. East Dakota? The Minnesota Viking. What’s his name? Yeah Lesnar. Yeah he found out real fast. He was supposed to be god’s answer to Satan, or Satan’s answer to Christ, and he found out real fast that’s not the place to be. He got hit, and man it changed his – he wanted to back, go to work in McDonalds.”

Punk stated when his signing was announced that he hadn’t picked a camp yet, but would be doing so soon, and would train for some time before making his debut. Frye doesn’t think Punk will be ready for his debut that quick.

“No. No, I think it’s a pipe dream, you know. It’s a pipe dream. Back when this thing first started out, you know everybody likes to compare the difference; and everybody when they first started, everybody was a world champion. One, or two, or three, or four, or five times world champion at whatever style they were, you know. Or a 10 time national wrestling champ. They had all been doing it for 10, 15, 20 years. And somebody just can’t sit there watching the show on the couch eating Fritos and say ‘hey I think I can do this’. Nah you’re an idiot. You’re going to get hurt and you to deserve to get hurt for thinking that way.”

What do you think PENNation? Give your thoughts on the signing of CM Punk in the comments!