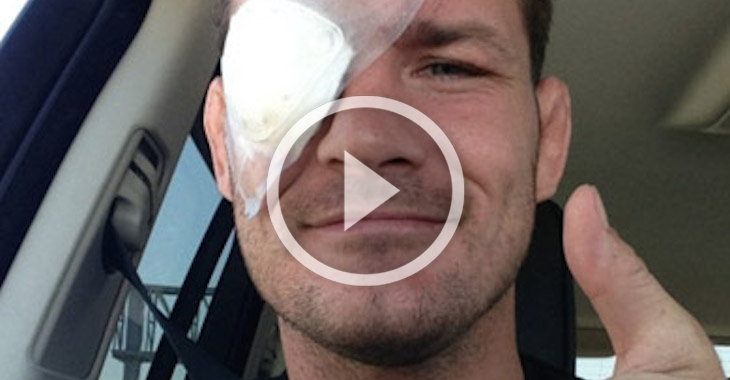 CB Dollaway is getting ready to fight Michael Bisping at this weekend’s UFC 186 card. Previously slated for the co-main event, Dollaway and Bisping will now precede Quinton “Rampage” Jackson’s octagon return but this still has the potential to be the more interesting matchup.

While it is the popular opinion that Bisping will blast through Dollaway, Dollaway has a chance to take the UFC world by storm when if he manages to capture the win. When asked if he will target the eye to take a shortcut to the win, Dollaway backed down and said he would not do it purposefully.

CB Dollaway on his secret plan against Bisping: “I’m going to just go out and use some of that Colby College wrestling to put him on his back and feed him some shots.”

Dollaway on what he learned from his loss to Lyoto Machida: “I learned to get in there and fight and not wait. I had too much nerves and emotion get ahold of me. When I get in there, he’s just another man. I’m not going to let that happen again. I’m going to fight my fight and do what I do. I know how that ends.”

Dollaway on how he needs to fight Bisping: “I need to mix it up and keep him guessing, not follow patterns and not just look for takedown or striking. I need to never let him get comfortable.”

Dollaway on what a win does over Bisping: “A win solidifies me as a real contender in the minds of the fans and that I do belong in the top ten. I’ll be on my way to the title shot. I have to beat him convincingly; I want to become a real contender. I need an impressive victory.”