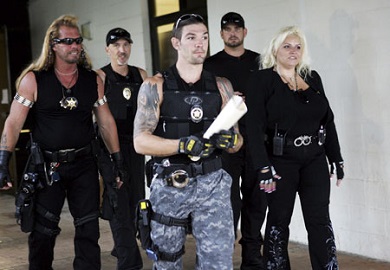 After trading shots with War Machine’s brother via Twitter, it appears Dog the Bounty Hunter is backing up his statements earlier that if War Machine didn’t turn himself in, Dog would start a manhunt against the former Bellator MMA fighter.

@WarMachine170 your now In my World your a FUGITIVE & I Am a BOUNTY HUNTER !! YOU NEED TO FEEL SHAME !! Be a MAN SURRENDER TO AUTHORITIES

@WarMachine170 Hey Boy This half breed Chiricahua Apache is on YOUR ASS #Eatmytazer !!