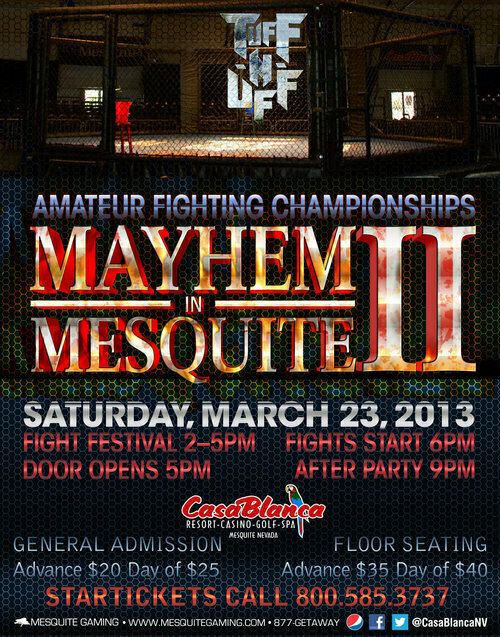 The nation’s premier amateur mixed martial arts promotion returns to Nevada’s CasaBlanca Resort and Casino on March 23 for “Mayhem in Mesquite II,” an entertainment spectacular that features a pair of DJs spinning live, free beer tastings and giveaways, gourmet food selections from a wide range of vendors and a fight card full of the nation’s brightest young prospects.

The Tuff-N-Uff pre-party starts this Saturday at 2 p.m. with DJ Dezie and DJ Johnny Utah directing the music as fans are invited to sample a variety of beverages in an on-site beer garden and to meet with famed UFC cutman Jacob “Stitch” Duran, “The Ultimate Fighter 11″ winner Court McGee and more. “Our first ‘Mayhem in Mesquite’ event was an incredible event, and we’re doing even bigger things the second time around,” Tuff-N-Uff president Barry Meyer said. “We’ve got a great lineup of fights planned for the evening, not to mention pre- and post-fight parties that make this event a real destination for anyone looking for the best time in town this Saturday.”

“Lenon has looked incredible in his first three fights, and his armbar win for the title just three weeks ago showed exactly what he is capable of doing in the cage,” Meyer said. “But Shane is a huge lightweight and brings an experience edge to the cage. Shane has all the tools to win this fight, and it will be the biggest test of Lenon’s career so far.”

Additionally, Tuff-N-Uff remains committed to helping find the future stars of women’s MMA, and “Mayhem in Mesquite II” sees six ladies compete in bouts across three different weight classes. One of those women is 24-year-old prospect Marina Shafir (2-0), the roommate and
chief training partner of Tuff-N-Uff veteran and current UFC women’s bantamweight champion Ronda Rousey, who will corner her friend.

In addition to the night’s featured contests, a full lineup of aspiring amateur fighters from some of the world’s top academies – including 10th Planet, Gracie Barra, Kings MMA, Robert Drysdale’s and Xtreme Couture, Syndicate MMA, Team Fusion,IMMA, KO MMA – will compete at “Tuff-N-Uff: Mayhem in Mesquite II.” And outside of the cage, representatives from Nevada’s largest Brazilian festival, Vegas Loves Brazil, will be on hand along with TapouT Hybrid and the United States National Guard, while St. George, Utah’s 95.9 The Hawk KZHK will broadcast live from the grounds.

Tickets for the March 23 event are on sale now through Star Tickets by calling (800) 585-3737. Advance purchase tickets range from just $20 for general admission to $45 for VIP reserved seats. Ticket prices are $5 more on the day of the event.

The evening’s pre-party starts at 2 p.m., and the first fighters enter the cage at 6 p.m. The official after-party takes place after the fights at CasaBlanca Showroom and is free to all Tuff-N-Uff ticket holders. The full fight card is available for viewing at TuffNUff.com.