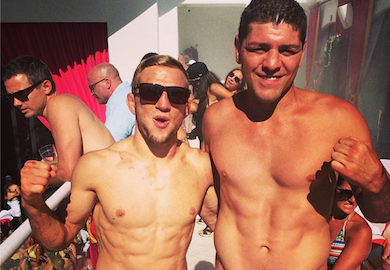 “There are a lot of crap being said about this episode. Actually, Urijah has never posted anything. A guy from our gym did the joke. Duane was going to give a Muay Thai seminar and the guy did the joke. It was because Duane said during my fight with Barao that I was giving him a free Muay Thai seminar in the fourth round. It got blown out of proportion.”

“We have a lot of respect for Nova Uniao because they have a lot of great fighters and professionals. Their head coach (Dede Pederneiras) has always respected us. We Team Alpha Male fighters would have never done that. It was just a stupid and silly joke, I wish it had not happened.”

In a recent interview with Tatame.com, newly-minted UFC bantamweight champion T.J. Dillashaw discussed the ongoing feud between his team and Nova Uniao.