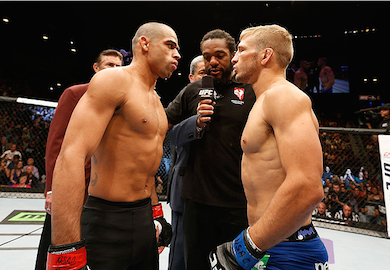 TJ Dillashaw is gearing up for a rematch against Renan Barao this Saturday at UFC 177 in his first title defense. Leading up to it he spoke with Ariel Helwani about why it wasn’t a smart idea to take a rematch so soon.

“For me yes (it was), for them no I don’t, I don’t think it s a smart move not only do I think he hasn’t had enough time to recover, but yeah after I beat him he’s going to take the long road back. It’s a tough situation to put yourself in, I think it’s a lot of pressure for him. Everyone asking me about the pressure I have on myself but I don’t feel like there is pressure, I shocked the world and I get to try to do so again and hold onto my belt, hes the one if he loses he’s gotta take the long road. and that’s a lot of added pressure to go and prove himself that me beating him wasn’t a fluke.”