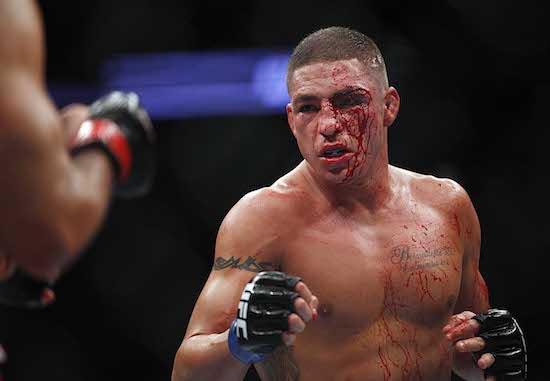 “For me, if there is one fight I could have, it’s Conor McGregor. Ill go fight him in Ireland. He wants to fight in a football stadium? I’ll fight him in a football stadium. When he jumped into the spot, he started barking up the wrong dog’s alley. I’m one of the guys who laid the bricks for this great career that he is having. I was one of the ones that created the expansion for the sport. I helped build the foundation on this big building, and the guy is just disrespectful. He doesn’t respect that, and he doesn’t respect any of the other fighters in his division that have paid dues. For me, being confident, that’s cool. He is a great mixed martial artist. I study the guy. He is very intelligent, he has a smart mind for the fight and he knows how to study fighters. He’s athletic, strong and he hits hard; a good fighter. But there is a respect factor. You got to have respect. From the beginning, that bothered me. No one stood up to him, so I stood up to him. I just told him not to talk crap about the guys that paid their dues, so he fires back at me that I’m fat and pathetic, I’l beat you in one round. So, I’m like, what’s up then, bro? Look, this guy is really good, he has a good hype train, done some awesome things in his four fights in UFC and now he’s looking for a title shot. This guy could probably beat 95-percent of the fighters in his division. The ones that will give him a tough fight are Cub, Frankie, and Aldo. Mendes and Bermudez, too. He’s a big guy and hits hard at 145. He can beat 95-percent of those guys, but he can’t beat me, I know that in my heart. Styles make fights and I am 100-percent confident that I will finish this guy within five rounds, make him give up. But the thing is, I like this guy. He gets under my skin in a positive, motivating way. I see how he evolves, his kicks and how he works hard and the way he likes to believe in himself. It has sparked this motivation and inspiration inside of myself. That’s why I fight, the passion.”

In an interview with MMAFighting.com, Diego Sanchez discussed Conor McGregor, and his desire to beat up the Irishmen.