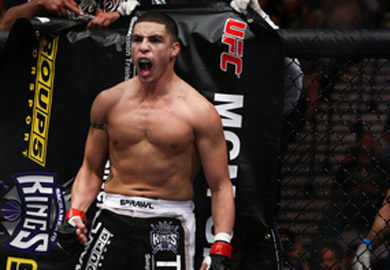 Diego Sanchez (24-5 MMA, 13-5 UFC) made his lightweight debut in February of 2009, this after a 6-2 run in the UFC’s welterweight division. “The Dream” scored back-to-back wins over Joe Stevenson and Clay Guida, which earned him a lightweight title shot against then-champion, B.J. Penn.

Unfortunately for fans of “The Dream,” Sanchez was dominated by “The Prodigy” at UFC 107, which resulted in a fifth-round TKO victory for Penn.

Following his loss to Penn, Diego would return to the welterweight ranks, where he posted a 2-2 record, scoring victories over Paulo Thiago and Martin Kampmann in the process.

Diego’s most recent effort served as his return to the 155-pound division, as he faced former PRIDE lightweight champion, Takanori Gomi, at March’s ‘UFC on FUEL TV: Silva vs. Stann’ event in Japan. Sanchez was able to defeat Gomi via split-decision that evening and is hoping to post another ‘W’ when he faces former Strikeforce lightweight champ, Gilbert Melendez (21-3 MMA, 0-1 UFC), at this weekends UFC 166 event in Houston, Texas.

In a conversation with MMAJunkie.com, Sanchez stated that not only is he confident that he will defeat Melendez, but that he has what it takes to dethrone current champion Anthony “Showtime” Pettis:

“I love the way I match up with Anthony Pettis, we’re a contrast in styles, and I feel my style beats his style. I’m a very good wrestler, and I’m a better grappler than I am a wrestler,” Sanchez said. “I feel I’m the best grappler in the division at 155 (pounds), and with my size advantage, I feel there’s not a guy that I can’t take down in that division. So it just comes down to being sharp in my striking and being ready to make a fight a fight.”

Sanchez will battle Melendez on the main card of UFC 166 which airs live on pay-per-view this Saturday night from Houston, Texas.

Do you feel Diego Sanchez has the tools in his arsenal to defeat the newly crowned 155-pound champ, or will his title aspirations end when he faces Melendez this weekend? Let’s hear it Penn Nation!