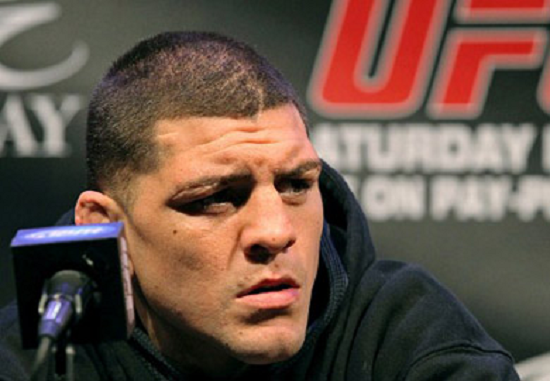 During the UFC’s special ‘UFC: The Time is Now’ press conference earlier today, Anderson Silva and Nick Diaz joined a star studded UFC cast for a live Q&A with fans and media members.

A media member asked Nick Diaz what he thought of Georges St. Pierre’s comments regarding Nick’s decision to fight Anderson Silva at middleweight, in which GSP said Diaz made a mistake.

“The thing is about old Georges is he’s not doing the fight, okay? So, he didn’t take the fight. He could barely say two things and he’d get the fight, just like that. But he didn’t want the fight. He’s scared to do the fight, and he’s scared to do the fight at 185 pounds, and he thinks that we have so much in common that maybe I don’t want to do the fight at 185. How the f**k does he know? Who knows, maybe I have a harder time making weight than old Georges does. I come in there skinny as s**t. Georges packs on an extra 20 pounds of muscle. I’m like, that’s what I have to do to fight at 185 pounds. So you can look at it like, however you want, but the thing is, the fact is, I’m like he didn’t really take into consideration what’s what when it comes to what’s really on with it.

“Not that [Silva] is not going to, but he doesn’t have to show up on weight, doesn’t mean that I’m not going to fight,” Diaz added. “The fact is that we’re both going to walk out there, and I’m going to be a lot smaller if I try to make a catchweight and my opponent decides that he doesn’t want to make weight. Now I actually have a real issue to do with, and that’s a real physical possibility. I’m not concerned about who gets fined a little small 10-percent or whatever, because you didn’t make weight or something. As far as I know, Anderson Silva, he’s always made weight. What’s one time you don’t make weight?”