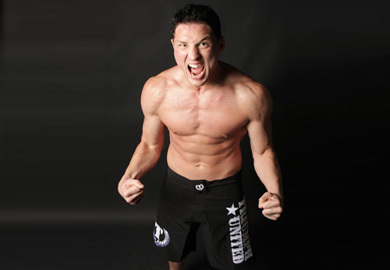 Former Bully Beatdown host Jason ‘Mayhem’ Miller was arrested on Sunday on domestic violence charges. The alleged victim said the former UFC fighter assaulted her after an argument over a text message she found on his phone.

All quotes come courtesy of MMAmania.com who spoke with the Support Services Division from the Orange County Sheriff’s Deparment.

Deputy C. Martin responded at approximately 1336 hours to the alleged victim’s location. The alleged victim reported that at approximately 2100 hours on Saturday, August 3, 2013, she and Jason Nicholas Miller were involved in an argument regarding a text message she found on Miller’s cellular phone. Deputies were unable to make contact with Miller on August 10th to obtain his statement.

On Sunday, August 11, 2013, at about 0530 hours, deputies were dispatched to a residence in Mission Viejo reference at loud party. When they arrived, they contacted Miller who was outside his residence yelling at his neighbors. Based on the report filed by the alleged victim, Miller was arrested for CPC 273.5, domestic violence.

This has not been “Mayhem’s” first run in with the legal system. Last August he was found naked while burglarizing a church, however the charges were dropped. The previous year he was arrested for subduing his sister after sibling “horesplay” got too rough.

The outspoken “Mayhem” has yet to release a statement on the incident. He will appear in court in several weeks.

Stay tuned to BJPENN.com for updates.